The EasyNET Analyser software is focused on a statistical analysis of geodetic measurements. This software product can process epoch measurement files exported from the EasyNET software. Each epoch file represents an adjusted spatial geodetic network. The uniqueness of this software is based on an exact statistical evaluation of network points (Fig. 1) and their movements (the spatial vectors) between the time epochs (Fig. 4). Using the transformation (Fig. 3), the spatial movement vectors can be expressed in any direction. The software also includes an internal network analysis, which allows an investigation of interrelationships among the survey points in the adjusted geodetic network (Fig. 2). The EasyNET Analyser software is designed for MS Windows in Czech and English language versions.

The software combines all data (measurements and user settings) into a project file, allowing easy data transfer and collaboration between different users. In addition to many result spreadsheets, there is a graphical output showing survey points and their horizontal and vertical movements. According to the statistical hypothesis testing the statistically significant movements are indicated and graphically marked (by red arrows, see Fig. 5). The graphical output is possible to export to bitmap format or AutoCAD drawing exchange format (DXF). The software also provides a configurable text protocol of the movement analysis (Fig. 8).

The software automatically detects the identical points included in the both epoch files (the 1. and 2. epoch). Coordinates of these points are graphically highlighted (Fig. 1).

The method preserves the original coordinates of the survey points. 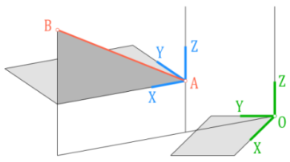 This method can be used for determining the survey point movements given parallel (X) and perpendicular (Y) to the line AB. The vertical movements (Z) are preserved. 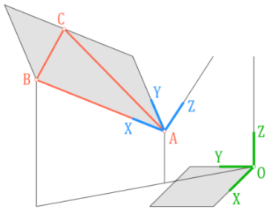 This method can be used for determining the survey point movements given parallel (X) and perpendicular (Y) to the line AB. The vertical movements (Z) are perpendicular to the plane ABC.

An example of applying of this analysis is an evaluation of flatness of surface plate. Firstly, the coordinate system must be set to the plate position defined by three reference points ABC. Then the flatness deviations of the surface plate are expressed by Z coordinates of the survey points.

The analysis is also possible to use for an evaluation of straightness. If the X-axis is aligned with the evaluated line defined by two reference points AB, the straightness deviations of this line are expressed by Y and Z coordinates of the survey points.

Users can also use an internal analysis of the geodetic network and investigate interrelationships among the network points regardless of the network position. Length and angular variables and their standard deviations are determined by this internal analysis (Fig. 2). In this way the size and shape of objects measured within the geodetic network can be simply described.

The movement analysis is based on the statistical evaluation of differences of point coordinates between two time epochs (1. and 2. epoch). The coordinate differences are evaluated by their standard deviations, which are derived from covariance matrices of the adjusted points.

Similar testing is carried out for internal analysis of movements (Fig. 9). There are evaluated the differences of length and angular variables between two time epochs. For example, this internal analysis can be used for statistical evaluation of tunnel convergence measurement.

Software documentation is published only in Czech language.

EasyNET Analyser Non-commercial is provided only for scientific and educational purposes, i.e. it cannot be used for commercial purposes. This version analyses any number of network points.